Even before Coeur d'Alene Pediatrics achieved patient-centered medical home (PCMH) recognition, it embraced the idea of providing a medical home for its patients. 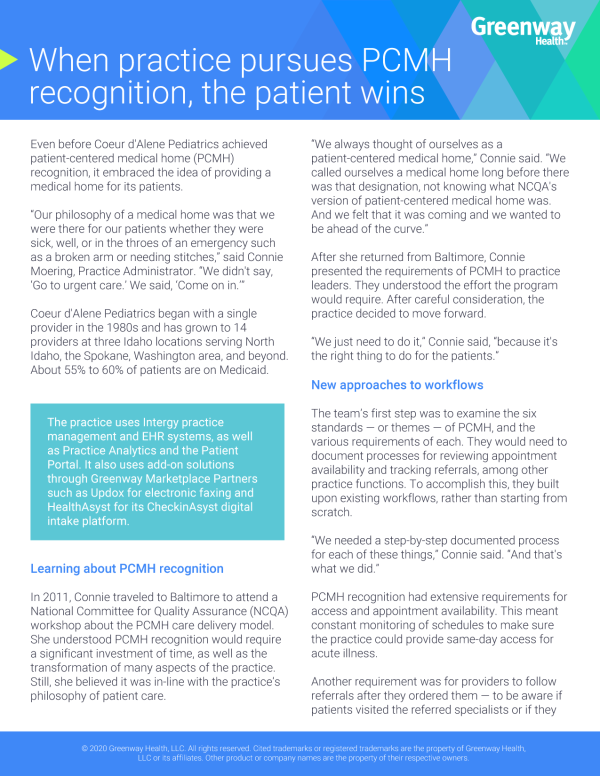 “Our philosophy of a medical home was that we were there for our patients whether they were sick, well, or in the throes of an emergency such as a broken arm or needing stitches,” said Connie Moering, Practice Administrator. “We didn't say, ‘Go to urgent care.’ We said, ‘Come on in.’”

Coeur d'Alene Pediatrics began with a single provider in the 1980s and has grown to 14 providers at three Idaho locations serving North Idaho, the Spokane, Washington area, and beyond. About 55% to 60% of patients are on Medicaid.

The practice uses Intergy practice management and EHR systems, as well as Practice Analytics and the Patient Portal. It also uses add-on solutions through Greenway Marketplace Partners such as Updox for electronic faxing and HealthAsyst for its CheckinAsyst digital intake platform.

In 2011, Connie traveled to Baltimore to attend a National Committee for Quality Assurance (NCQA) workshop about the PCMH care delivery model. She understood PCMH recognition would require a significant investment of time, as well as the transformation of many aspects of the practice. Still, she believed it was in-line with the practice’s philosophy of patient care.

After she returned from Baltimore, Connie presented the requirements of PCMH to practice leaders. They understood the effort the program would require. After careful consideration, the practice decided to move forward.

“We just need to do it,” Connie said, “because it's the right thing to do for the patients.”

The team’s first step was to examine the six standards — or themes — of PCMH, and the various requirements of each. They would need to document processes for reviewing appointment availability and tracking referrals, among other practice functions. To accomplish this, they built upon existing workflows, rather than starting from scratch.

“We needed a step-by-step documented process for each of these things,” Connie said. “And that's what we did.”

PCMH recognition had extensive requirements for access and appointment availability. This meant constant monitoring of schedules to make sure the practice could provide same-day access for acute illness.

Another requirement was for providers to follow referrals after they ordered them — to be aware if patients visited the referred specialists or if they changed their minds. Either way, the provider should be in the loop.

This created the need for a full-time patient advocate to manage the large number of tests and referrals sent to outside specialists and organizations.

"In the end, the patient wins in this, truly."
Connie Moering, Practice Administrator, Coeur d'Alene Pediatrics

The practice created another position to handle care coordination — assisting patients identified as needing additional resources as well as patients with high-risk conditions.

“These transformation measures that PCMH consisted of really did transform our practice in terms of dedicating individuals to be able to really monitor that 100%, instead of just occasionally,” said Devin Berend, Director of Operations.

Intergy has since offered PCMH dashboards, which the practice has used for subsequent submissions, in addition to creating custom reports and pulling data manually. The practice submitted in 2013, 2016, 2019, and now on an annual basis. 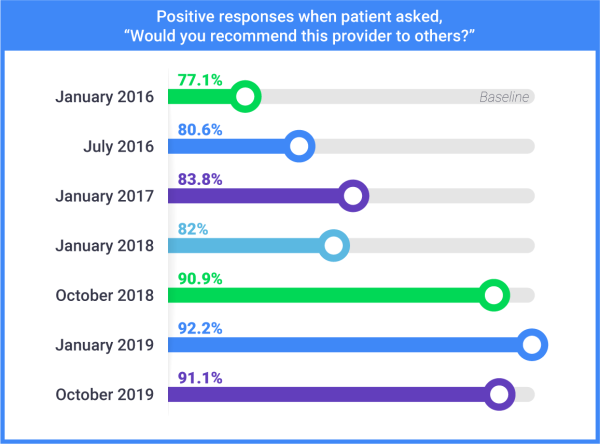 The practice has continued to build on the telemedicine program it began in 2017. Using tablets, providers conduct video visits with patients in a HIPAA-compliant manner.

Following the COVID-19 outbreak, the practice expanded its telemedicine program by over 4X, to include all providers at all locations. This brought the number of providers offering virtual visits from three to 14 — including seven pediatricians, six nurse practitioners, and one physician assistant.

During this time, the practice also expanded the types of visits available via telemedicine to include medication check-ups, follow-ups, and other visits directed by the clinical staff during triage.

“We have opened up the ability for all patients to be seen via telemedicine,” Devin said. “Before, we were limited to Medicaid, due to reimbursement.”

Participating in the PCMH process helped the practice improve its performance in many different areas, top among them patient satisfaction.

The practice focused not on what the patient experience should be, but what it actually was. Feedback has shown the move to PCMH has benefited the patient.

Engage and empower your patients between office visits.

Engage with patients beyond the office, without adding extra work.

Addressing disparities in healthcare during COVID-19

What is care coordination? Understanding the basics