Is the 21st Century Cures Act just another industry update, or is it an opportunity to change the way your practice delivers patient care? Before we tackle that question, consider your familiarity with the Cures Act and its implications for patient access to medical records.

An informal poll conducted during a Greenway webinar in April found just 73% of attendees were familiar with the Cures Act going into the event. By the end of the webinar, 98% said they were familiar.

If you’re like many of those attendees — new to the Cures Act and looking to understand how it can improve data access, patient portal availability, and more — read on.

From rare to routine: EHR use rises over two decades

Flash back a couple decades and you will find few physicians using an EHR. With so many varieties of EHR launching in a relatively brief time, systems struggled to work together on a large scale.

Now, despite widespread EHR adoption, interoperability — or the ability of systems to speak to one another — remains a hurdle. Consider, for example, the difficulty patients may experience as they attempt to transfer their health information from one hospital to another.

When the government passed the Cures Act in 2016, it sought to define and advance interoperability, as well as ease regulatory burdens and prohibit information blocking — or the practice of standing in the way of health data access. These goals added up to a larger mission to improve the patient experience.

Quick guide: What is information blocking?

A focus on patients

The patient is at the center of the Cures Act, according to the Office of the National Coordinator for Health Information Technology (ONC).

The government tasked ONC, along with Centers for Medicare & Medicaid Services (CMS), with creating rules to guide implementation of the law. As the certifying body for EHRs, the ONC produced rules that pertain to members of the health IT industry. CMS, meanwhile, produced rules that apply to payers (and that impact providers too).

The ONC’s Final Rule seeks to give patients access to medical records at no additional cost, and to give providers the choice of IT tools to provide the best care.

Here’s what the Cures Act ONC Final Rule means for patients, according to the agency:

The Cures Act promotes a new “app economy” based on the principle that patients should have a transparent view of healthcare costs and outcomes. Smartphone apps have “huge potential” to deliver affordability and quality, according to the ONC.

Today in an app store, you can download different apps such as Wordle! or Candy Crush Saga. In the future, patients will be able to navigate to their app store of choice and access apps that can help them manage and track their healthcare needs. By giving third parties access to patient data via application programming interfaces (APIs), the Cures Act aims to give rise to this new economy of healthcare apps.

Proponents believe the Cures Act, by requiring vendors to build apps a certain way, will pave the way for developers to produce new applications. Over time, apps will become more integrated with other health technology systems, with support for Fast Healthcare Interoperability Resources (FHIR) required.

By staying up to date on the Cures Act, you can ensure your practice meets the requirements. The result for patients will be greater access to medical records, choice, and ultimately better care. 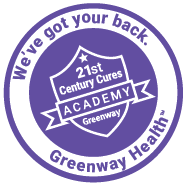 Online patient-provider engagement without extra work for your staff.

Communicate with patients outside the examination room.

Learn More in the Knowledge Center

21st Century Cures Act guidance: How cloud-based solutions have your back